Please sacrifice ten minutes of your time to read this. Pause Candy Crush. 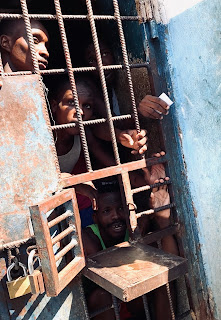 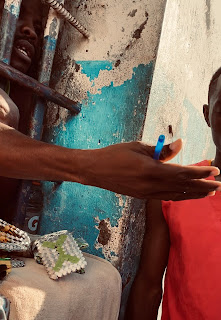 It is almost 8 in the morning and I pull up to Jacques house to pick him up. We are going to the prison today. As we drive to the prison, we laugh and talk about life and how cool we feel driving a car in Jeremie. I park the car and we walk up to the door as a guard opens it. We greet the guards and I follow Jacques down a narrow walkway to visit the prisoners. To the left of me are rusty prison doors and a few little barred windows. Hands reach out through the slats between the bars and voices rise. This prison has over 380 prisoners and only a few rooms. There are between 50 and 60 men in each room. I talk with them and ask them their stories and why they came to be in here. So many stories. So many eyes staring at me through the gaps of the bars. They are trying to hand me little wallets and purses they have made from woven trash. I take every single one of them one by one. Jacques and I fill the backseat of the car with them. We want them to be encouraged to keep creating these beautiful things. Before Jacques and I go back inside the prison, we talk about what we have seen. Tears stream down our faces. Jacques says, “I understand when people go without, but no one should be locked up without food.” We wipe our tears and step back inside the prison. After paying everyone for their work, I feel called to go to the cell at the end of the walkway. I grab a bucket and pull myself up by the bars of their window so I can look in. 58 pairs of eyes stare up at me and smile. They all want to talk and share and ask me questions. Some of their eyes are hard and rough, others are big and gentle. Some of them are in here because they have been accused of something they did not do, some for stealing, some for fighting to almost the death, and others for murder. The guards tell me not to stand so close to the bars of the window because they will try to choke me. I feel like they won’t, so I don’t move. I press my face against the bars and hold their hands in mine. My shiny nails contrast against their stained ones. We talk and I tell them that the bible says that there isn’t a difference between killing someone and wanting to kill them. I tell them there is someone I would like to kill and so I am no different from them. I smirk and say the only difference between them and me is that I wouldn’t get caught;) One gentle eyed man says he killed a man six years ago and has been in the same cell for 6 years. He has 9 more years to go. There are so many men packed into one cell that they can’t all go to sleep at the same time. Some are obligated to stand while others sleep and then they wake each other up and take turns. They sleep on the cement floor. There is one five-gallon bucket at the end of the room for all of them to go to the bathroom in. It is emptied in the morning and at night even though it is overflowing. The men lowest on the pecking order sleep near the bucket as feces and urine overflow onto the floor near their feet and heads. Men without families only eat what the prison feeds them. The “food” is worse than dog food. These men stand in these cells all day with hardly any airflow. They are hungry and thirsty and dirty. Their cheeks are sunken, and they have dark circles under their eyes. Their ribs and collar bones are prominent. My fingers grip tightly around the prison bars as I realize the only difference between me and them is a few pieces of rebar and concrete. My heart hurts and my mind races. What can I do to help? I tell these men I will do my best to do whatever I can to help and I go to the next cell to see the children. I talk with them too until my eyes catch the glance of a precious brown eyed boy. I know him. I press my face between the bars of their prison door and ask him if I know him. He looks up at me and before he can say yes, I know who he is. I have held him on my lap while watching Moana a few years ago. He has held hands with my friends in the market pretending to protect them. He is one of my favorite street kids. I feel panic and loss. I look around wildly at how I can get him out. Could I actually escape this prison with him? Of course not. However, in a moment like this, logical thinking doesn’t always come first. He was a street kid who got in a fight, and now he is behind bars. He is 15. This isn’t a movie. I am not watching the Count of Monte Cristo. I am watching it with my own eyes. It is time to go. We have already been here four hours and this is my last day. I will be back. I walk as freely out of the prison as I walked in. Freedom is something I take seriously but I also have taken it for granted.

I feel like the prison hit me so hard because I am such a strong advocate for freedom. Being Outlaw Unchained by anything. What if I was behind those bars? What if I didn’t have food or water or a place to sleep for years on end? What if it was my friends or my family? So many questions. No answers. 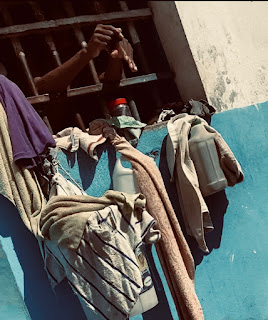 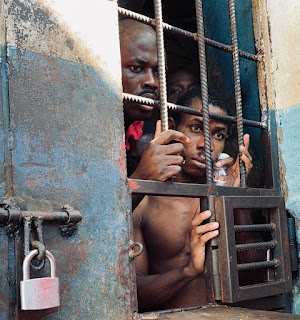 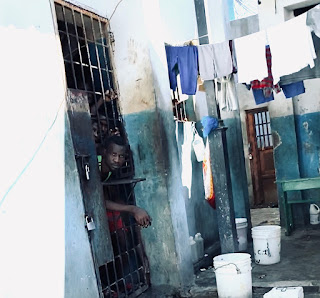 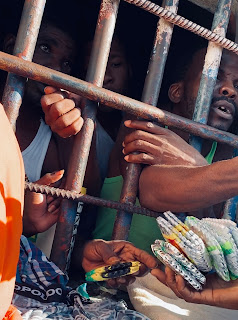 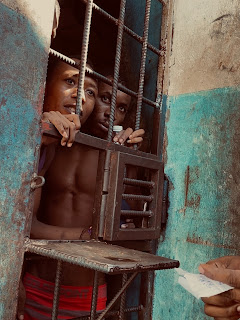 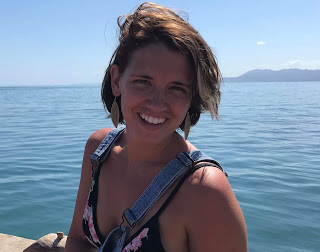